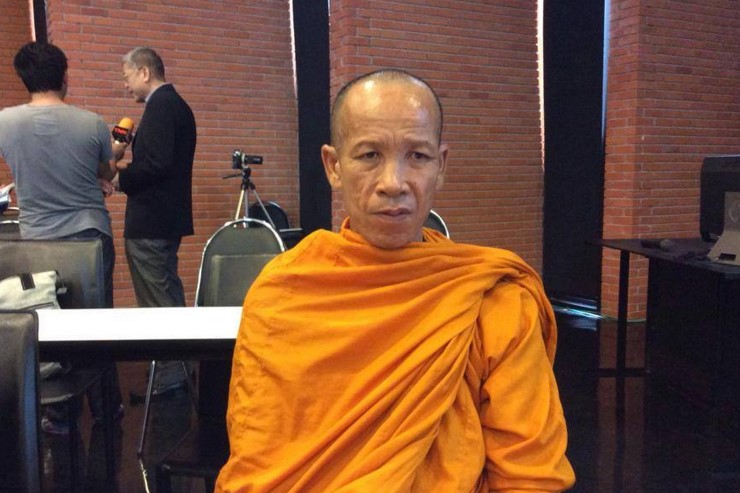 Luang Por Prasert is a monk who is currently the abbot at a temple in the Yasothon province of Thailand. He used to be known as “Lung Super” (Uncle Super), the old man who drank every day. He had worked on a fishing boat since 2000, where he would be sailing far from Myanmar. Then, a friend persuaded him to work on a boat fishing in Indonesian seas because of the higher wage. He worked on that boat for six years. In 2014, the government of Indonesia announced the arrest of the foreign boat. He was one of the casualties, left in Indonesia. It was not until March, 2015 that he was able to return home. LPN provided temporary shelter during the process of appealing for compensation for an injury that he received in a work accident. After ending the process through the Social Security Fund, he returned to his home town and decided to be a monk for the rest of his life. The abbot was told that his family collapsed because he was addicted to vices, but when he joined the monkhood, his life turned to be positive under Buddhism. He spent his savings of 5,000 baht to buy some soil to fill in the temple area in order to prevent flooding. Seeing him devote his money to the project, people in the village also gave. Donations flowed for building a sanctuary in the temple. Today, the abbot comes back to LPN once again, but not now because of his age problem. The abbot came to ask for consultancy about fraud of the village temple fund. The man who was once the village drunk turned into a person respected by the entire community. He is also playing a pivotal role in not letting people in the community send their children overseas to work on fishing boats. Luang Por Prasert says that “now the boot is on the other foot, happiness is the merit of the mind. It brings about the cheerfulness and self-dignity.”

All presentations by Luang Por Prasert